Baby yourself royally in London

By Sarah Sekula, Special to CNN

(CNN) — There comes a time during pregnancy, after finally choosing the perfect pastel for the baby’s room, installing that complicated car seat and sorting through all the new bibs and onesies, when it’s high time to think less about Pampers and more about being pampered.

Or perhaps you just want to visit London to celebrate the upcoming birth of royalty (the Duchess of Cambridge and Prince William are expecting their bundle of joy any day now).

Either way, we’ve got you covered. Here are nine spots in the British capital that will have you living it up like a royal in no time:

Check-in at this five-star hotel begins with sparkling cider for mommy-to-be and some bubbly for the frazzled dad-to-be, not to mention a bouquet of roses. 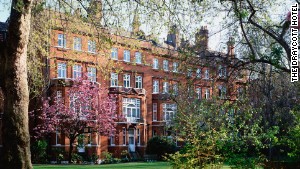 The Draycott Hotel is offering a Royal Babymoon package, complete with a prenatal massage.

Settle into your room before heading to your prenatal massage, included in the Royal Babymoon package. Don’t worry: The Draycott has thought of everything, including a cuddly teddy bear for the newborn, extra pillows and parenting magazines.

Don’t forget to sip some tea at 4 p.m. (it’s on the house), traipse through the private garden and settle down for hot chocolate and homemade biscuits (also on the house) at 9:30 p.m. Ice cream cravings? They’ve got that covered, too, with nightly room delivery of strawberry, chocolate or vanilla.

The Goring is most famous for the fact that Kate stayed there her last night as a single lady before the royal wedding. It was also the venue for the reception after-party.

The Goring has welcomed Royals since 1910. Even the queen of England holds her annual summer garden party there. And why not? This hotel is said to have the largest private garden in London. With the stamp of approval from Kate and company (aka a royal warrant from the queen herself), you can rest assured you will feel perfectly regal, too.

There’s nothing like having a personal stylist dress you to the nines, especially when she takes you on a sartorial tour through the heart of Covent Garden, one of London’s most fashionable neighborhoods. Book a half day with Eliisa Makin, the wardrobe consultant at St. Martin’s Courtyard, to find all the trappings of a great wardrobe, including L.K. Bennett and Barbour, two labels Kate has been seen wearing. (Note: Ask Makin to take you to King’s Road, too. Perhaps you’ll land yourself a Kate sighting.)

Makin, a stylist and fashion editor, will take you to lunch to discuss the looks you are after and then dress you from head to toe in the season’s trends. There’s plenty of ground to cover with a mix of fashion, beauty and lifestyle boutiques, including Sienna Miller’s label Twenty8Twelve, Jaeger London and Cos.

Breathe in, breathe out: Tri-Yoga

Bring on the harmony with a visit to this popular yoga studio with various locations throughout London. Besides offering a slew of classes (vinyasa, ashtanga and aerial yoga), there are treatments that will further put any expecting couple at ease. Ladies can opt for pregnancy craniosacral therapy, reflexology or acupuncture; gentlemen will dig the sports massage or the Thai foot massage.

And if you’re up for some extra credit, the studio also runs workshops for couples who are expecting, including topics such as hypnobreathing, emotional detox and postnatal restorative techniques.

After working up an appetite, stop by the on-site cafe for raw carrot cake bites, filling salads, smoothies and juices. There’s even a pregnancy drink (packed with apple, pear, kiwi and spinach) said to give mother and baby an extra wallop of nutrients. 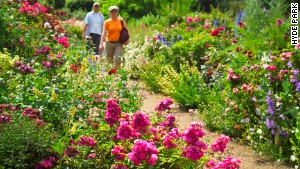 Picnic in the park: Hyde Park

What once was a place for King Henry VIII and his court to hunt deer and wild boar in the 16th century is now a refuge for tai chi, swimming and kicking back. Stake out a shady spot among the 350 sprawling acres and wind down with a picnic.

This gorgeous expanse is a prime spot for people-watching and a delightful place for an impromptu photo shoot. The picture-perfect backdrops include hyper-manicured gardens, Queen Elizabeth Gate and Serpentine Lake.

After whiling away the morning, consider heading to the south side to spot the Household Cavalry Mounted Regiment, who reside at the Hyde Park Barracks. (Note: check website for times.) 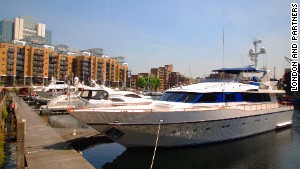 Getting out on the water is another way to see the city at your leisure.

When it comes to spoiling yourself silly, lounging around on a private yacht is a surefire way to feel like a VIP. Aboard the Princess V48 motor yacht, appropriately named the Happy Bunny, you can easily spot the famous landmarks in style without ever mingling with the masses.

Opt to cruise to Alderney if you have a few days. It’s often described as the most British of the Channel Islands. Here, you can hop out and walk among the puffins, rabbits and, if you’re lucky, the elusive blonde hedgehogs. Short on time? Choose a day trip down the River Thames instead.

The crew will even take you on a small, high-speed boat for water skiing and wakeboarding lessons. You’ll have alfresco BBQ by day and fancy dinners by night. For an extra special touch, arrange the services of a Michelin-trained chef to prepare your meals.

If you have a passion for high-quality chocolates and dream of playing the part of Willy Wonka, the chocolatiers at Melange can help. At this whimsical store, try your hand at creating sweet treats through chocolate-making classes and even chocolate painting.

Start by a sampling cocoa beans and a selection of chocolate bars. Then, learn the art of truffle making by flavoring and shaping different types of delectable fillings. If that’s not your cup of tea, then opt for chocolate painting, where guests whip up delicious pieces of edible art. If you visit in October, be sure to check out Chocolate Week, a festival where the capital’s best chocolatiers offer up to-die-for desserts. 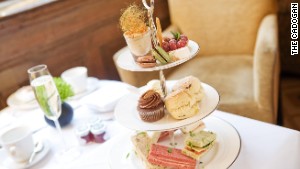 Indulge yourself with tea at The Cadogan Hotel.

The perfect way to unwind in London is, of course, to sip tea in the afternoon. The Cadogan has been serving afternoon tea since 1887, so, by now, they have perfected it.

Relax among the original artworks, stained glass windows and oversized mirrors while nibbling on finger sandwiches, home baked scones, Chelsea buns and a variety of Partridges teas, supplied by the queen’s grocer, Partridges of Chelsea.

You’ll be feeling positively British and blissfully stress-free in no time.

The Royal Botanic Gardens are, hands-down, among London’s most beautiful and serene places. So it’s no surprise the gardens were declared a UNESCO World Heritage Site in 2003.

This 750-acre botanical garden is a maze bursting with color and unusual greenery.

It’s also the ideal spot for some serious tranquility. Take a tour of Kew’s Palm House, considered one of the most important surviving Victorian iron and glass structures in the world, or visit the treetop walkway, which takes you under the ground and then up 59 feet in the air to see the mammoth oaks from a different angle.

Afterward, get a feel for royal living by peeking into Queen Charlotte’s Cottage, an 18th-century thatched cottage that was a private haven for Queen Charlotte and her family in the 18th century.